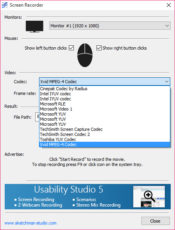 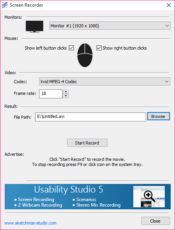 Rylstim Screen Recorder is a solution if you want to do tests with your PC camera and record desktop activity. It is possible to run this test for websites, desktop applications and also computer games.

Recording with two webcams is possible with this tool, and you can conduct usability testing for mobile applications and real-world items alike. You should know that well-planned tests are more beneficial and creating a scenario which the user would follow during the test can be achieved with this one.

The full-screen preview is another crucial feature of this tool because it has a full-fledged internal player which lets you analyze the recorded session immediately upon its completion.

With this Rylstim Screen Recorder, it is easy to change the location of the camera and the transparency of the recording made by the webcam. You can add or remove cursor highlighting.

Rylstim Screen Recorder also offers you the possibility to use two webcams, and this is useful when it comes to mobile applications and paper prototypes.

VideoPad
VideoPad is a popular video editing an

MKVToolnix
For managing your Matroska files, you